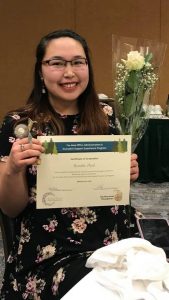 Part of Southcentral Foundation’s role as a two-time Baldrige Award winning organization is to share its best practices with other companies. SCF’s award winning Administrative Support Training Program was designed over 15 years ago to provide administrative support employees skills that go beyond standard practices and cultivate mental models that help them become successful future leaders. One example of this is recognizing relationships as a foundation of high quality customer service. Whether it is an interaction between employees or with a customer, participants are reminded that in every interaction it is best to RELATE: Respect, Engage, Listen, Advocate, Thank, and Encourage. The practices applied in the six-week training program are directly related to the Baldrige Excellence Framework and support SCF’s Vision and Mission. Each year, SCF hosts 10 – 11 ASTP classes and graduates approximately 80 employees per year into administrative support positions. Like all motivated employees of SCF, ASTP graduates have the ability to be considered for promotional opportunities in various areas of SCF. A strong group of well-trained administrative support professionals is vital to SCF’s customer-driven approach to care and supports the philosophy of training and promoting employees from within.

The success of SCF’s training program has not gone unnoticed. Many organizations have expressed interest in the processes and training methods that produce such positive outcomes. At the request of Bristol Bay Native Corporation, SCF worked to establish a curriculum based on the ASTP model to support their administrative needs. BBNC wanted to pilot a professional development training for its shareholders to increase readiness of future employees. A year-long training curriculum was created in partnership between SCF and BBNC; the training included 15 BBNC shareholders who attended live web-based trainings to support professional development. The participants were also mentored by SCF employees via phone for a minimum of one hour per week and three in-person sessions at SCF. Each participant shared what they had learned from the program with the BBNC Board of Directors and executive leadership.

Rosalie Duna Paul of Togiak, a BBNC shareholder, and participant in the Nuka Office Administration and Executive Support Experience Program pilot found out about the program on the BBNC Facebook page. Since she had already completed AVTEC’s Business and Office Technology Program and received the associated accounting specialist and administrative assistant certificate, participation in this training was for her own professional development. “The training was different from what I had taken from AVTEC but the topics were similar. Most of the training process was through webinars but we also had in-person sessions throughout the year,” said Rosalie. While enrolled in the program Rosalie is also employed as the Tribal court juvenile healing to wellness case manager for the Traditional Council of Togiak. By taking advantage of the programs available to her she is supporting a successful future for herself and BBNC.