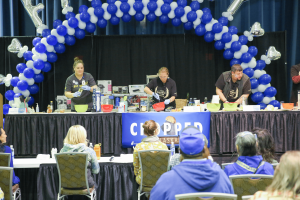 After nearly an hour of spirited remarks by Alaska Native leaders and policymakers, attendees of Southcentral Foundation’s 21st Annual Gathering found their seats in preparation for SCF’s first indigenous cooking competition, Chopped Alaska. The challenge was a collaborative effort hosted by SCF Public Relations, which was judged by an esteemed panel. Each contestant was equipped with an identical cooking station, complete with cutting boards, whisks, ulus, and ribbon-tied baskets.

Tanya Kashevarof, an SCF health educator whose primary focus is tobacco-cessation education, took the stage first. Kashevarof has experience with cooking demonstrations at The Gathering. The previous year, in support of Dinner Makes a Difference, she delighted attendees with everything from pesto “zoodles” to fruit smoothies, and was one of the first people nominated to participate in this quick-fire challenge.

SCF Vice President of Executive and Tribal Services Ileen Sylvester was next to join the stage. When coordinators pitched the idea of Chopped Alaska to her, she immediately asked to participate, and named a few ingredients she wouldn’t mind having in the pantry.

Finally, SCF Elder Program Manager Chris Klabunde took his place behind his cooking station. Klabunde is a huge fan of food and is known for his smoked salmon spread, passion for fishing, and love of unicorns, kittens, and Taylor Swift. He playfully asked for “essence of unicorn” to be included in his basket.

With the three participants ready, The Gathering emcee set the timer for 20 minutes and revealed the required mystery ingredients: jarred salmon, honey, cabbage, and pilot bread. Each participant began cooking feverishly at their stations.

With the thought of making her famous agutak recipe in the back of her mind, Sylvester spoke about the benefits of the birch-derived sugar she used, xylitol. She recalled her family’s decision to battle diabetes together and make changes as an entire family. Sylvester revealed how they found xylitol, which is known for a low glycemic index and has been found to have a negligible effect on raising blood sugars. The California Dental Association stated that xylitol is also a great option for preventing tooth decay because the bacteria that cause cavities cannot utilize it to grow.

Meanwhile, Klabunde played to the crowd as he smashed his pilot bread into the jarred salmon, mixed with a touch of honey, creating salmon spread. “The pilot bread serves as a binding agent and helps hold everything together,” he explained. He even invited a young attendee to taste test his creation as it neared completion.

Kashevarof incorporated an ingredient the judges were very surprised and delighted by: dill pickles were added to the vinaigrette she prepared to top her salad. Unfortunately, she forgot one of the required ingredients — the honey, and this oversight may have cost her the win.

The event was judged by the voice of Disney’s Pocahontas, Irene Bedard; Cook Inlet Tribal Council’s Employee Relations Manager Nikki Graham (who is also a graduate of Le Cordon Bleu College of Culinary Arts); and Jessica Stugelmayer, the senior digital content editor for Edible Alaska. The judges were impressed by the dishes prepared by all of the participants, but it didn’t take long to determine the clear winner. In the end, Ileen Sylvester was named champion and winner of Chopped Alaska, and received the Golden Ulu for her agutak — a dish which left the judges asking for seconds.