Dental Teams Carry on Food Drive in Memory of Co-Worker 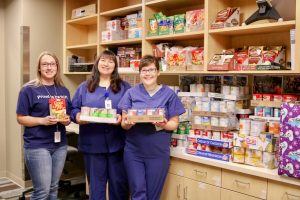 Commissioned Corps officer Kim Pitts was a SCF dental hygienist from 2005 until she passed away from a pulmonary embolism in January 2006. During her short time at SCF Dental, Kim became interested in the SCF Elder Program food drive, which collects food donations from employees across the organization and distributes to Elders during the Thanksgiving holiday.

Kim decided to get SCF Dental involved in donating to the food drive by developing a friendly competition between the Fireweed and ANMC clinics. The challenge sparked huge participation and led to record donations from the department. That was the beginning of the dental food drive, which typically contributes hundreds of food items every year to the Elder Program.

Pitts passed away on Jan. 24, 2006. For a short time, the dental teams took a step back from the food drive; the passion had left with Kim’s passing. After realizing the impact dental participation had on the Elder Program and the community, they vowed to take part in the food drive every year following in memoriam.

In 2012, the Benteh Nuutah Valley Primary Care Center opened and several of Kim’s previous co-workers transferred to the new clinic. Today, VNPCC Dental works year-round to raise money for the Elder Program food drive, in honor of Kim and her vision nearly 13 years ago.

The VNPCC Dental team typically organizes fundraising events, only open to SCF employees, leading up to a mass purchase of food later in the year. These events include flapjack Fridays or games. Every November the team goes on a large shopping spree to buy food for donation. In the past, they have purchased Thanksgiving dinner items such as turkeys, cranberry sauce, and pies, with their largest donation totaling up to 744 food items. This year, the focus is on everyday food items to help support those in need beyond the holiday season.

“Win or lose, dental has put forth 100 percent effort to support the Elder food drive,” said Tanya Shanks, VNPCC supervisor of dental assistants. “[In the past] when VNPCC dental has won the food drive, we made floats for anyone who wanted one in the building. We wanted to make sure that we recognized all of the efforts that everyone put into winning because without them playing our games, eating our foods, or now joining us for the painting class, we would not be as successful as we are.”

Those who worked with Kim Pitts say she had a bright spirit that was contagious. Thanks to her example, the SCF Elder Program has a team of people willing to dedicate time and effort to the well-being of Elders.

by Krystin Bogan and Addison Arave