For those who knew Breanna Moore, her laughter, energy, and bouncy blonde curls will always be in their memory. The 20–year–old, known to her family and friends as Bree, was a bright and beautiful young woman who lived life to the fullest. According to her family, Bree never minded getting dirty — whether she was at Big Lake riding dirt bikes or making mud pies as a kid. The Dimond High School graduate was always outgoing and kept everyone smiling with her dance moves. A lover of animals, Bree spent time every week at Adopt-a-Cat where she cared for sick cats.

“She made every minute of her life special,” Butch Moore said of his daughter.

Tragically, Bree’s life was cut short. She was killed by her abusive boyfriend on June 26, 2014.

Bree’s death left her family heartbroken — devastated that friends and family did not recognize the signs of dating violence. After her death, the Moore’s worked with the Alaska Legislature to pass the Alaska Safe Children’s Act, which includes teen dating violence awareness and prevention education in Alaska’s schools. 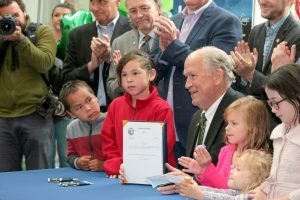 Dating violence is a pattern of behavior involving the use or threat of physical, sexual, verbal, emotional, or other abusive behavior by one person that harms, threatens, harasses, or controls another person within a current or former dating relationship.

Bree’s parents have launched a statewide campaign to raise awareness with resources for young people who may be facing dating violence.

“I’ve signed a few bills in my time but this one is very special, the dancing, the message — there is so much emotion in this room,” Governor Walker said during the signing ceremony at the Anchorage Native Primary Care Center where hundreds gathered. The governor praised Bree’s parents for the unwavering advocacy for teen dating violence awareness. Governor Walker also praised Southcentral Foundation’s Family Wellness Warriors Initiative for its work to end domestic violence, abuse, and neglect.