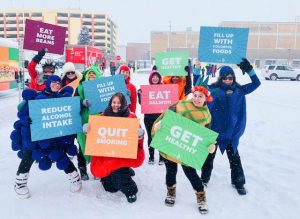 Each year, toward the end of February, thousands of Alaskans and visitors from across the globe travel to Anchorage to take part in the Fur Rendezvous winter festival, also known as Fur Rondy.

The 10-day event has been celebrated for 83 years and hosts traditional activities that showcase Alaska Native cultures, like the blanket toss and the Charlotte Jensen Native Arts Market. Fur Rondy boasts fun for the whole family, including crowd favorites like the running of the reindeer, unique snow sculpture displays, Rondy World Championship Sled Dog Races, and a carnival.

“The overall message is that colorectal cancer is treatable, beatable, and preventable,” said Velda Miller, SCF health education supervisor. Health Education’s primary goal of participating in the BP Rondy Grand Parade was to encourage the community to get screened for colorectal cancer. They promoted FIT, a fecal immunochemical test that screens for hidden blood in the stool, which can be an early sign of colon cancer. The FIT is a convenient colorectal screening test provided at the Anchorage Native Primary Care Center. It is simple and allows customer-owners to take the test at home, and mail back their sample — reducing the time and expense of traveling to Anchorage.