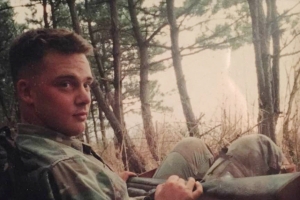 James Shelton during his service as a U.S. Marine.

After achieving 20 months of sobriety, James Shelton, manager of Southcentral Foundation’s Soldier’s Heart Program, has regained his humor and has been able to rebuild a positive relationship with his wife and two daughters. This powerful transformation is a result of his experience with the Soldier’s Heart Program.

Shelton served as a U.S. Marine for 15 years. During his service, he was deployed twice to both Okinawa, Japan and Iraq. While on deployment, Shelton found that his youngest daughter was an inspiration for him to work though his challenges.

Toward the end of Shelton’s military service, he oversaw recruitment for Alaska and soon after, accepted a job at SCF as manager of recruitment. He noticed SCF was different from other organizations and appreciated everyone was willing to build a relationship with one another while focusing on the organization’s vision and mission. At SCF, Shelton learned to share his story and spoke for the first time about his post-traumatic stress and addiction to alcohol. Shelton enjoyed sharing his story because of how he felt after sharing — instead of keeping it to himself. However, his PTS symptoms continued.

It wasn’t until Shelton attended Soldier’s Heart training that he was able to take the next step on his healing journey and address the root causes of his distress. After the training, he decided he wanted to quit his job to honor the self-work he needed to do. After sharing with his supervisor, they were able to identify a path that would allow him to stay employed and continue to work on healing. Shelton’s co-workers were supportive of him and his decision, and didn’t treat him differently. After participating in treatment, he continued to attend weekly meetings at Soldier’s Heart and eventually led one of the meetings.

Shelton became involved in the program and enjoyed helping other veterans and first responders. He hopes every state has a program like Soldier’s Heart and appreciates the importance of including spouses and family to help understand and support their partner or family member who has PTS. Shelton feels the more people Soldier’s Heart can serve, the better.

There is a camaraderie within Soldier’s Heart that Shelton appreciates. He has built relationships with other veterans and first responders who are going through similar situations. Before participating in the program, many of them shared they felt alone. The goal of Soldier’s Heart is to provide a structure that creates a community of support.

“Despite the PTS and my experience as a Marine, I would willingly go and do it all over again in a heartbeat.”

Shelton has faced many challenges on his journey, yet he remains resilient.

Soldier’s Heart services are available to all veterans, law enforcement, and first responders who have experienced service-related trauma and/or have PTS. Preliminary research results are showing great promise and participants feedback is that the experience has been life-changing.