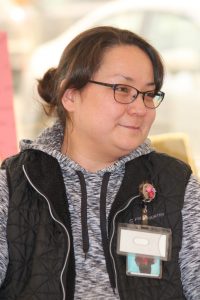 Jesse Lynn Merculief’s cancer survivor story began at 18 —  with an abnormal pap smear. Jesse contracted HPV. The Center for Disease Control states HPV is so common that, “…nearly all sexually active men and women,” get it in their lifetime; some strains are even asymptomatic. Unfortunately, Jesse was exposed to a cancerous strain and was diagnosed with cervical cancer.

Thankfully, Jesse’s abnormal pap smear triggered secondary testing for cervical cancer before it had spread. The cancer needed to be removed surgically along with some of the cervix, to ensure the cancer didn’t return. This missing piece, Jesse was told, would prevent her from conceiving children. But she would then be free; free from cancer, free to live her life as a young person.

It was hard for her, at 18, to conceptualize what it meant to not be able to have children. ‘Maybe it just isn’t in the cards for me to have my own babies,’ — she remembers thinking at the time — ‘Maybe I have enough friends’ and family members’ babies to help with anyway.’

A few years later, the days of cancer now seemingly behind her, Jesse made a doctor’s appointment to look into why she was feeling more lethargic than usual. A cancer diagnosis at 18 meant that Jesse, now 25, was very conscientious of her health; because of how she had been feeling, she was prepared for bad news that day. However, the last thing she expected to hear was that she was pregnant.

When Jesse told the baby’s father she was pregnant and going to raise the baby, she knew she might be doing it alone. She had told him she couldn’t conceive and so she couldn’t expect him to father a child he wasn’t prepared for. Jesse grew up not knowing her father’s identity; she knew that love was more important to raising a child than a traditional family dynamic without love. The opportunity to have her own family, even a family of two, was worth the struggle she anticipated.  And carrying her pregnancy to term would be difficult with her medical history. But Jesse persevered; she delivered a beautiful, healthy, baby girl. Jesse chose a name in honor of the new little part of herself that she never thought she’d have; she named her newborn daughter Lynette.

Three years passed; Lynette was an active toddler and her father was still in the picture. Jesse worked shifts at the local bingo hall. Life was different than Jesse expected for herself but Lynette brought lightness and joy to a young family’s hustle and bustle. 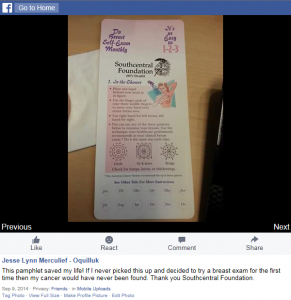 “This pamphlet saved my life! If I never picked this up and decided to try a breast exam for the first time then my cancer would have never been found. Thank you Southcentral Foundation.”

During a routine well-woman visit at the Anchorage Native Primary Care Center, Jesse’s provider demonstrated how to perform a breast self-exam to check for lumps and sent her home with a reference guide. Four months later, Jesse remembered to review the self-exam guide and try it out. She found a large lump in her breast — a lump that wasn’t there four months prior.

Jesse had the lump biopsied to test for cancer; it had grown so quickly there wasn’t much hope that the lump was benign. When the biopsy came back positive for cancer cells, it was determined that she needed genetic testing to strategize the proper treatment for her breast cancer.

Jesse learned she had the BRCA2 gene mutation, meaning that her cells didn’t produce the same quality of tumor resistant proteins as an individual without the mutation. Because of this mutation, in addition to the stage 3 – 4 breast cancer diagnosis, she also had a 70 percent chance of developing ovarian cancer.

To save her life, Jesse underwent extensive surgeries and therapies. There was the double mastectomy procedure to remove both her breasts. The cancer had progressed to the lymph tissue on her left side, so that was also removed. And to address the high risk of ovarian cancer, she had a full hysterectomy, causing her to experience early onset menopause.

Recovery was difficult. Today Jesse is thankful Lynette (now 13), doesn’t remember helping her with bandages and drains from surgeries. Lynette’s father left when the reality of Jesse’s cancer started to set in, young Lynette could very well lose her mother; looking back, it is easy to see that he was overwhelmed by all the possible outcomes outside of their control. They remain good friends, and he is still an active part of Lynette’s life.

When Jesse tells this story, the path from discovery, diagnosis, and finally developing a treatment plan seems very quick. But it took three years for Jesse to once again be declared cancer free. Through it all, Jesse survived. She even managed to keep her job during her recoveries and showed up to work regardless of the various side effects she was feeling that day. She had to support herself and little Lynette. 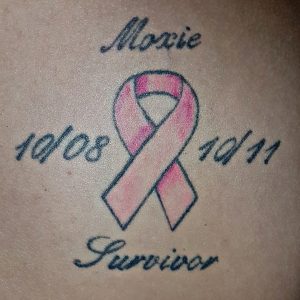 Jesse Murculief’s back tattoo is a pink ribbon for breast cancer awareness that commemorates what she survived, what came from that survival, and what is now behind her.

During her treatment, a good friend of Jesse’s started calling her Moxie. Mirriam-Webster defines moxie as, “1: energy, pep; 2: courage, determination; and 3: know-how.” Jesse didn’t just fight her cancer with moxie, it was how she lived life. To her, the extraordinary courage and grace that she exemplified to her daughter while fighting breast cancer was simply a byproduct of being a good mom. Quitting was never an option. Lynette needed her mom.

Most of Jesse’s story is centered on her family; providing for her loved ones is clearly a source of pride and motivation for her. She is quick to move away from discussing her years battling cancer and instead focus on the silver lining, because discovering the BRCA2 gene mutation created an opportunity to revisit Jesse’s paternity.

Finally I said, “What if he has kids and what if they have the same BRCA2 mutation? I need to know. I’ll have a guilty conscience if these people don’t know they need to be tested for this same thing.”

So finally she gave me his name and I found him on Facebook. …And I messaged him, but he wouldn’t respond back. …So I went on his friends list, and it seems kind of pushy when I think about it now, but I found the next person with his same last name, and her name was Heather, so I messaged her. 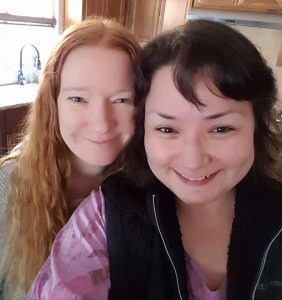 And I said, “I know this is going to sound really strange, I have this BRCA2 mutation. My mom told me that this is who my dad was, and I see that you’re related to him. But I just want you to know … and if he has other kids I think they should know, so that they can get tested too; so that maybe it won’t have to come to a point where they have to get a double mastectomy or hysterectomy, maybe you can catch it early.” And she responded back to me, and it turned out to be my sister.

She’s about seven years younger than me….I actually just spent my 40th birthday with her; she flew me and my daughter down [to Roseville, CA]. …this was just in December. …So that’s how this whole breast cancer thing got me to meet my sister. …Now we talk all the time and we’re planning on visiting again. So that was one good thing.

Besides discovering new family, another “good” thing was the support that Jesse received from SCF. As a customer-owner, Jesse had access to world-class medical care during her cancer treatments. For a significant portion of Jesse’s early adulthood, she was at the Alaska Native Health Campus weekly to attend appointments, and decided that someday she would like to work for SCF. If surviving two bouts of cancer before thirty taught her anything, it was the power of her decisions. If Jesse’s mind is made up, consider it done. Jesse went through the Administrative Support Training Program in 2010, and has since made considerable professional developments during her career here. She is now a patient accounts specialist III, and was recently awarded a Living Our Values from her manager, Charlotte Kost. In her nomination, Charlotte stated, “In terms of work ethic Jesse is a role model for her peers.” Way to go Moxie! 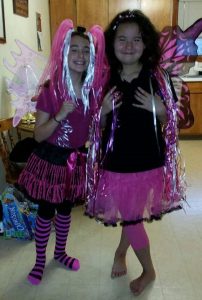 Lynette Larsen and her friend Michaela Kimball, ready to race in style for a previous Alaska Run for Women.

Join in on a Merculief family tradition — participate in the Alaska Run for Women, June 9. Lynette brings her best friend every year, and the two love to plan elaborate costumes in support of raising awareness for breast cancer. This year they will be participating with Team SCF. If you would like to join, contact Julie Stayden with Health Education at (907) 729-3146.