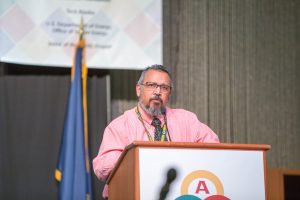 Neil Chandler joined the U.S Air Force as a medic in 1992. In 2001, he separated from the military to pursue his bachelor’s degree in science, studying at the University of Minnesota-Crookston. Upon completion he received a commission back into the Air Force as an officer. Later, Neil received his master’s degree in health care management at Trident University International. In 2006, as a result from a reduction in force, he was release from active duty and joined the U.S. Air Force Reserves. Neil and his wife Keri, also a retired Air Force veteran, have been married for 22 years and have six children. In 2015, Neil and his family moved from Illinois to Anchorage where he worked as a contracts manager at the hospital on Joint Base Elmendorf-Richardson. In 2016, at the Crossing church in Birchwood, Keri saw a flyer to submit an application to participate in the Soldier’s Heart program pilot; Keri encouraged Neil to apply; he did and was one of the first applicants to the program.

Soldier’s Heart aims to reduce the symptoms of post-traumatic stress and aid in suicide prevention among veterans, first responders, and their families. Through Soldier’s Heart, participants have the opportunity to better understand what causes triggers, and address the loss, grief, and anger that come with post-traumatic stress disorder. When participants first join Soldier’s Heart they often struggle to tell their story. They are often apprehensive about the effectiveness of the trainings, but then realize that in sharing story, they create a common language — a place to talk freely without fear of judgment. Participants are able to relate and build trust in knowing that others have walked in their shoes and they aren’t alone. Soldier’s Heart provides a safe place with tools to help with the triggers and anger management.

Attending Soldier’s Heart as a participant changed how Neil viewed post-traumatic stress; he used to think he was alone in the struggle, that no one would understand him, or know what he was going through. As a result of the training, he was able to open up, not only with his therapist, but also to his wife and children. Allowing them in for the first time and having conversations with his family that he never had before. Neil believes the program helps others to achieve the same experience he had. Just understanding that they’re not alone is the biggest hurdle to overcome. Building trust with individuals on the same journey lays a solid foundation for healing.

“The awareness and knowledge that I obtained from attending Soldier’s Heart was enlightening and empowering my journey of wellness.”

“The process validated me and my emotions; it reinforced that I am not alone in this journey.”

“It keeps me grounded: I’m not alone.”

Neil hopes that organizations across the country adopt a program similar to Soldier’s Heart for their people, and that Soldier’s Heart can continue to touch the lives of customer-owners for years to come.