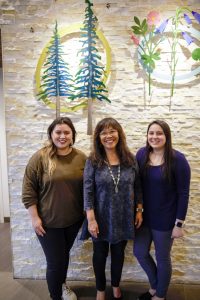 Former RAISE interns Jazmin and Toni Taylor are Tlingit, Athabaskan, and Ta’an Kwach’an — First Nations people of the Yukon Territory. Both graduated from the University of Alaska Anchorage in 2016 with a bachelors of science in health science and most recently graduated from Creighton School of Pharmacy and Health Professions entry-level Occupational Therapy Doctorate Program in May.

Jazmin began interning for the RAISE Program during the summer of 2008 at the Head Start Youth Literacy Program and worked there for two summers in a row; Toni later started at the same program during the summer of 2010. “The RAISE Program sets a good foundation; it’s a more structured experience than those that are typically available to teens. It was really empowering to get the opportunity to intern for a hospital and work with the Alaska Native population at such a young age,” said Jazmin.

While Toni was working at the Head Start Youth Literacy Program, part of her summer was spent working with children at Camp Healthy Kids. “When I was working at Camp Healthy Kids, I realized I had the potential to work with kids as an occupation,” said Toni. The camp focuses on wellness through fun, culture, literacy, exercise, nutrition, safety, and making healthy choices for a healthy life.

Toni will be working in an Alaska pediatric practice this summer and wants to work with both the pediatric and adult population. She is interested in aquatic therapy and has completed more than 50 hours of pediatric aquatic therapy. Jazmin is interested in working with the adult outpatient population and continuing to pursue specialty practice in women’s health. “I always knew I wanted to work at SCF and serve the Native population. My higher education was a journey of figuring out in what capacity that would be,” said Jazmin.

The RAISE Program is designed to develop leadership skills in Alaska Native and American Indian youth ages 14 to 19. SCF’s RAISE Program offers three sessions per year: summer, winter, and graduate programs. Each session exposes participants to health-related careers and expectations of the workplace, while supporting both personal and professional development.