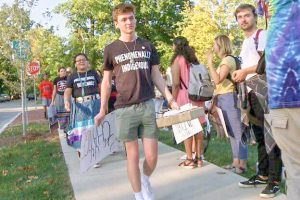 Indigenous Peoples’ Day is a holiday that celebrates and honors the Indigenous people of America and commemorates their shared history and culture. It’s recognized on the same day as the federal holiday of Columbus Day. The holiday, becoming widely recognized nationwide, was especially poignant this year for a young Indiana University student who has roots at Southcentral Foundation

Caleb King, a former SCF RAISE intern, is Sugpiak and a member of the Seldovia and Koniag Tribes. He is also the founder of the Native American Student Association at Indiana University. King contacted the mayor of Bloomington, Indiana and lobbied to have what many know as Columbus Day, proclaimed as Indigenous Peoples’ Day.

“I’m passionate about it because Indigenous people deserve a right,” King told local media. “This is our original homeland and while I’m from Alaska and my homeland is back there, we all work together and fight for each other.”

His efforts paid off and a planned rally turned into a celebration. The Bloomington Mayor’s Office proclaimed Oct. 8 Indigenous Peoples’ Day — the first city in Indiana to do so. While King was the lead organizer, he credits the help of the many student organizations and friends who helped with the effort.