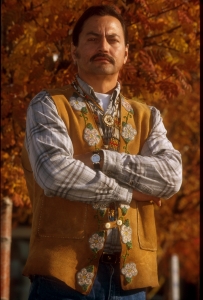 SCF congratulates Chief Gary Harrison for his leadership and devotion to the Alaska Native Community.

It’s a special time of year — where thousands of Alaskans gather to meet up with friends, learn about issues affecting their families, and hear from those making a positive impact in the Alaska Native Community. The 2019 AFN Convention will be held in Fairbanks with the theme Good Government, Alaskan Driven to unite the Alaska Native Community to achieve good government for all Alaskans.

One part of the convention recognizes the accomplishments of people who have gone above and beyond in support of Alaska Native people. The most prestigious of the awards are the AFN President’s Awards. These awards recognize individuals who have promoted and assisted in the development of their community, or whose accomplishments and leadership qualities have most directly affected and benefited Native people.

Harrison is the longest standing member of the Chickaloon Village Traditional Council. It is because of his foundational work on behalf of Chickaloon Native Village that the Tribal government has been established as a role model for other indigenous communities around the world. Harrison has been instrumental in continuing to build positive momentum toward wellness in the Native Community, including teaching our children and future generations the Athabascan language, traditional values, ethics, and cultural traditions. He has shared story and made sure that diverse voices are heard.

He has also demonstrated that inclusivity and unity are top priorities, bringing the community together for the greater good. For example, he played a key role in securing funding for the C’eyiits’ Hwnax Life House Community Health Center in Sutton. Working together with Knik Tribal Council and Southcentral Foundation, he also helped conceptualize the plans for the Benteh Nuutah Valley Native Primary Care Center.

In Chickaloon Native Village, he has put his characteristic energy into culture camps, the award-winning school, Elder programming, and community-building projects such as roads, salmon restoration, and a recent memorandum of agreement with Joint Base Elmendorf-Richardson to communicate on mutual concerns, and support and coordinate management of resources.

Harrison is committed to all issues closely connected to the preservation of Athabascan cultures. His activism and calls for action within international organizations such as the Arctic Athabascan Council, Indigenous Peoples Secretariat, Arctic Council, the Sovereignty Network, and the International Environmental Network have brought about positive change and generated many conversations about social justice, self-determination, and subsistence rights that help further perpetuate our culture and heritage.

SCF congratulates Chief Gary Harrison for his leadership and devotion to the Alaska Native Community.

“Chief Gary Harrison has been a strong advocate for Alaska Native people for more than three decades. He has stood in the gap for us to achieve true self-determination and Tribal sovereignty. An awesome Tribal leader, Chief Harrison is well deserving of the AFN President’s Award for Public Service,” said SCF President/CEO Katherine Gottlieb.