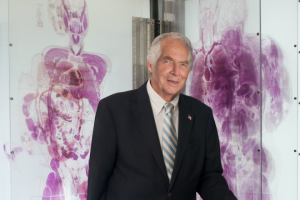 Southcentral Foundation mourns the loss of Dr. Donald A.B. Lindberg who served as the director of the National Library of Medicine for more than 30 years. A pioneer in applying computers to health care, Dr. Lindberg led the effort to computerize NLM’s holdings making them accessible to researchers around the globe.

“He changed fundamentally the way biomedical knowledge and health information is collected, organized, and made available for public use — in small villages in Alaska and Mali as well as in laboratories of Nobel prizewinners,” the NLM Board of Regents said in a resolution upon his retirement in 2015.

Dr. Lindberg used a vibrant historical exhibit program to interest diverse young people in biomedical careers. He helped to create the exhibition Native Voices: Native Peoples’ Concepts of Health and Illness which explores the interconnectedness of wellness, illness, and cultural life for Native Americans, Alaska Natives, and Native Hawaiians. SCF’s Family Wellness Warriors Initiative has been featured in the exhibit.

The exhibit was years in the making. The National Library of Medicine put countless hours into coordinating with dozens of partners, including traditional healers and medicine men, Tribal councils and consortiums, Tribal colleges and academia, urban health boards and health care systems, and museums and other cultural resources to create the collection. More than 70 interviews were conducted, and artifacts and images were contributed by numerous Tribal organizations and individuals who appreciated the opportunity to share their healing traditions and be a part of the educational mission of the exhibit.

The exhibit traveled to underserved communities and cities with large Native populations, with a focus on sharing the information with the next generation. Additional educational resources provided teachers the means to extend the discussions into their classrooms.

“Dr. Lindberg was a great friend to SCF and will be remembered for his advocacy for Native American people. He dedicated his last years of service in the National Library of Medicine to create a traveling exhibit on traditional healing and Native Communities. He was a man of courage and will be missed by many,” said SCF President/CEO Katherine Gottlieb.