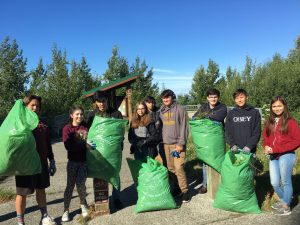 During the summer of 2018, 11 RAISE interns trained with Alien Species Control, an Anchorage invasive weed contractor, and UAF’s Cooperative Extension Service to remove and properly dispose of invasive plants. Interns visited local Anchorage parks and public trails extracting invasive plants and as much of their root system as possible. Interns identified, picked, uprooted, bagged, and properly disposed of nearly 3,000 pounds of invasive plant materials. This allows native plants to regrow in areas where the invasive plants prevented them from growing, ultimately supporting pollination and biodiversity. The interns were recognized, thanked, and encouraged by passing members of the community who frequent the Anchorage public trail system.

Interns expressed appreciation for land management and the experience, which was noted in each intern’s RAISE scholarship portfolio following the end of the season. This project provided interns an understanding about invasive plants and encouraged respect for the land. They learned about formal education and work history of environmental specialists and by the end of the project, invasive plant species were considered controllable in the Municipality of Anchorage. RAISE summer 2019 interns will benefit from partnerships provided by Alien Species Control and UAF’s Corporative Extension Service, and expanding their knowledge of land management, environmental specialists, and invasive and native
plant species.