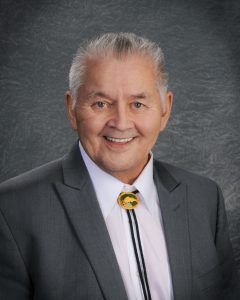 Southcentral Foundation’s Board of Directors Chairman James Segura received the National Indian Health Board Public Health Innovation Award this spring. The award honors individuals, Tribes, organizations, and programs that have enriched and improved Alaska Native and American Indian public health. The National Indian Health Board created this award to recognize excellence, achievement, and innovations that are above and beyond the call of service in the field of public health. As one of the original members of SCF’s Board of Directors, Segura has been instrumental in influencing positive change — not only at SCF, but in the Alaska Native and American Indian community throughout Alaska.

Born and raised in Kenai, Segura’s journey started with a commitment to not only his people, but also his country by enlisting in the U.S. Navy and serving a four-year term. Following his service, he spent several years working with the State of Alaska and federal government before beginning his career with the Kenai Native Association.

Over a nine-year period, he worked his way up to the position of deputy director. Later, opportunity led him to his next position as executive director of Salamatof Native Association, where he dedicated the next 20 years of his career. As a member of the Alaska Native Health Board, the Kenaitze Indian Tribal Council, and as chair of the Salamatof Housing entity; Segura’s efforts contributed to the continued strength of his culture and people.

Since 1982, he has been devoted to establishing SCF as a national leader in health care delivery. As chairman of SCF’s Board of Directors, Segura is a champion of health and health-related services. Under his leadership, SCF has strengthened its Alaska Native workforce; earned state, national, and international recognition for the Nuka System of Care; and established policy for world-class health programs.

“He is so worthy of this prestigious award,” shared SCF President/CEO Katherine Gottlieb. “His 30-year commitment to improving health care for Alaska Native people is unwavering. Under Mr. Segura’s leadership, SCF has become a global leader in health care. I extend my warmest congratulations to him not only for receiving this award, but for also being a champion for the Alaska Native and American Indian community.”

Segura is a past recipient of the CIRI Shareholder of the Year Award, where his efforts to promote wellness within the Native community were recognized. He received a National Indian Health Board Area/Regional Award; designed to recognize individuals who have made significant contributions to improving health care on an area or regional basis for Alaska Native and American Indian people.