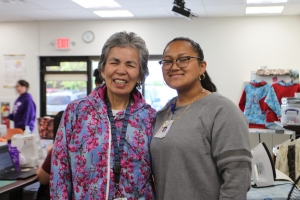 Southcentral Foundation’s Shirley Tuzroyluke has received the 2019 National Indian Education Association’s Lifetime Achievement award. Tuzroyluke was born in Juneau, Alaska, and is a descendant of Tlingit and Nisga’a peoples. She has dedicated her career to serving Alaska Native and American Indian youth. Starting her career in 1974, Tuzroyluke worked as a tutor in the Indian Education program at East High School. In 1978, she started with Cook Inlet Tribal Council working with students at West High School. Driven by curiosity, Tuzroyluke began to track her student’s success before and after participation in the program and found improvements in the GPAs and credits students earned.

Tuzroyluke took this same enthusiasm with her when she joined SCF in 2007, as The Pathway Home’s traditional culture administrator. She was responsible for integrating traditional practices into clinical practice and treatment and later became the manager at the RAISE Program in 2008.

The NIEA recognized Tuzroyluke’s work spearheading many RAISE Programs. The Academic Achievers project group was implemented to assist at-risk youth make up lost credits. The students’ GPAs increased and they were on track to graduate. The RAISE Program worked with the Anchorage School District to implement Credit by Choice for students that participated in the RAISE Program summer session. The syllabus was designed by the RAISE Program and the interns earned credit for a language arts class with an emphasis on professional writing. The Credit by Choice Program contributed to RAISE participants’ high school graduation rates rising to 95%. Many past RAISE interns are hired with promising careers throughout Southcentral Foundation.

Tuzroyluke currently serves as the RAISE youth advisor where she designs academic services for Alaska Native and American Indian youth. The range of services include educational and career development, and post-secondary planning and evaluation. Through traditional and contemporary training and experience, SCF employees develop and implement culturally-relevant strategies to meet the needs of the RAISE Program. The advancement of the Alaska Native and American Indian youth inspires Tuzroyluke to do more for the youth to reach their goals. “The success of the program is done as a team. I am humbled and so grateful to have worked with people over the years who are passionate and share the same vision,” she shared.