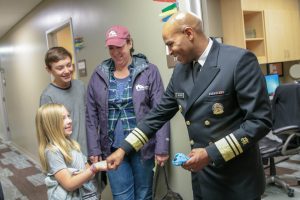 Southcentral Foundation welcomed many distinguished guests as the summer drew to a close, ranging from grantmakers, to a federal commissioner, and the nation’s top doctor. As a two-time Malcolm Baldrige National Quality award recipient, leadership is always happy to share what makes SCF a global leader in health care.

“There are really two things that came through. Number one is the care that is provided here. The folks really care about the customer-owner. You can see it’s not just delivering a service — it’s about really meeting the needs of the individual.

“I’ve not seen anything like this across the country. I can see why SCF has won awards for the care they are providing. I just can’t wait to tell the rest of the country about what I’ve experienced today,” said the U.S. Surgeon General.

Commissioner Brendan Carr with the Federal Communications Commission was also impressed by SCF’s health care delivery system. During his tour of the Anchorage Native Primary Care Center, Commissioner Carr was briefed on SCF’s telemedicine capabilities. The goal of his trip was to get a better understanding the challenges of internet access in remote communities.

Funders play a key role in SCF’s ability to offer world-class health care. SCF has received more than $3 million from Rasmuson grantmakers — which translates into funding for facilities and programs that benefit customer-owners. SCF would like to thank all the visitors who allowed us to share our story of how the Nuka System of Care is transforming health care.