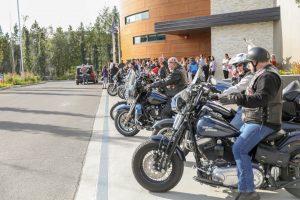 Members of the Christian Motorcyclist Association get their bikes ready for the ride around campus.

Each year, Southcentral Foundation holds a motorcycle prayer walk. On Sept. 4 SCF leadership, employees, customer-owners, and community members attended the fourth annual prayer walk on the Alaska Native Health Campus. The purpose of this event is to encourage, support, and lift up Alaska and Alaska Native people through prayer and the heartbeat of a drum.

Starting at the Nuka Learning and Wellness Center Tribal Drum, attendees had the opportunity to meet and learn about positive action taken by community members, hear the meaning behind the motorcycle prayer walk from SCF’s President/CEO Katherine Gottlieb, and take part in the prayer walk, which was led by drummers and circled the entire Alaska Native Health Campus.

With the sun shining and a group of bikers ready to ride, members of the Christian Motorcyclists Association and other bikers launched the walk by starting up their engines — the roar from the bikes echoed across campus. Taking off one by one, they rode around the campus, leaving a trail of blessings behind them. Following the bikers, SCF leadership, employees, customer-owners, and community members walked along the Alaska Native Health Campus playing drums and singing, adding additional blessings while soaking up the sun. When they returned, they enjoyed a meal while networking and celebrating the blessings that were made on the campus.

SCF would like to thank the more than 100 attendees who participated in the annual prayer walk, while meeting new faces, seeing old ones, and sharing story with each other.