Traditional Inuit Tattooing Reclaiming Culture, one Skin-Stitch at a Time 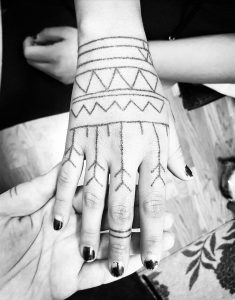 Sarah Whalen-Lunn, CIRI shareholder and SCF customer-owner, trained in traditional Inuit tattooing with the Tupik Mi group. Sarah’s style of tattooing is a fusion of old and new. She often shares her work on social media, and some of her most popular tattoos feature current subject matter. These combinations of old and new designs allow her clients to choose tattoos unique to their journey, reclaiming their culture in a way that fits them best. Sarah and her peers call these modern takes identity tattoos.

Take for example, an Inupiaq mermaid tattoo Sarah gave herself. The subject matter’s pose and proportions reflect mainstream classic mermaid tattoo designs. Whereas other details, like the scaleless fish tail, woman’s hips, and traditional markings are reminiscent of Sedna, the Inuit sea goddess. It is a tattoo many contemporary Alaska Native women would be proud to wear, despite the recent historical decline in traditional tattooing. The work of Sarah and her peers to reclaim the culture of traditional tattoos may very well preserve this timeless tradition, and also heal struggles of identity.

Just a few generations ago, Inuit people were tattooed for a variety of reasons in their lifetime. Some tattoos were done for pain relief and performed as a functional acupuncture. Other tattoos held more meaning by design and in placement. A woman’s tattoos signified her marriage eligibility. Some tattoo designs even had the power to sway the spirits. Women without finger tattoos, it was told, would be refused access to the afterlife by the sea goddess.

“When I began to have children of my own I really began to search out a way to reconnect, or connect at all, with the Inupiaq side of my heritage. I wanted my children to have some sense of who they came from. It’s not easy to know where to start or who you should be looking for, so it has been all really slow going for me. My art, though, had really begun to pick up and doors were starting to open up. I was lucky enough to be in a few shows with Inupiaq artist Holly Nordlum who started Tupik Mi.”

Tupik Mi began as an artistic collaboration between Holly Nordlum and renowned Greenlandic tattoo artist Maya Sialuk. Holly was able to use her community ties and reputation to spread awareness of Maya’s knowledge and training opportunities; the competition for selection to be trained by Maya was tough. Only Sarah, Holly, and two other women were selected to be trained in Inuit tattooing by Maya.

Sarah was trained in two indigenous tattoo methods: hand-poking and skin-stitching. Hand-poke technique tattoos are done with a hand-held stick tool, and the image is created one dot at a time.

Skin-stitch tattoos are created by using a needle to sew trails of ink with thread under the skin. Modern equipment is used for both techniques, and is disposed or sterilized in compliance with health and safety standards.

Sarah, Holly, Maya, and their fellow traditional tattoo artist peers diligent work has helped to revitalize the tradition, and because of it Inuit tattoos have made a comeback. So much so, that when Sarah applied for the Rasmuson Individual Artist Project Award this year she was ecstatic to have found that she’d been selected. The Individual Artist Awards Program was created by Rasmuson Foundation to “put money directly in the hands of artists.” Sarah’s selection is a slight departure from past Alaska Native artists selected for traditional art projects. She shared on Facebook, “I can’t even begin to describe how caught off guard I was with the news of this project award! Makes me feel like I am definitely headed on the right direction for my life. If you applied this year and didn’t get it, keep applying, who knows how many times (6) I did and didn’t get it before today! Thank you Rasmuson Foundation for recognizing me and helping me further the work I am so grateful to do.” Sarah’s Rasmuson project will take her to her grandmother’s community of Unalakleet, as well as other rural Alaska hubs including Nome, Kotzebue, and Utqiagvik. She will continue her education by conducting research on traditional tattooing designs.

Want more? Read the expanded story at southcentralfoundation.com.
Sarah can be found on Instagram as @inkstitcher and reached by email at inkstitcher@yahoo.com.