After decades as “beneficiaries” of an inefficient, underfunded federal health care system, Alaska Native and American Indian people were ready for radical changes in their health care experience. Southcentral Foundation’s origin story begins with groups of determined Alaska Native and American Indian people coming together and advocating for a voice in program planning and operations.

As a result of their persistence, Congress passed the Indian Self-Determination and Education Assistance Act in 1975. In this Act, Congress acknowledged that federal domination of these health and education programs was causing more harm than good. The legislation gave Tribes greater control over the funding which affected their community health and well-being. Encouraged by this change, Alaska Native people established SCF on March 8, 1982, under the Tribal authority of Cook Inlet Region, Inc. The vision was a health care system, rooted in cultural strengths, that could improve health and change lives. A series of amendments and other legislation throughout the ‘80s and ‘90s allowed Tribes to take self-determination several steps further to own and operate their programs. At last, by the late ‘90s, Alaska Native people in southcentral Alaska had full control as the “customer-owners” of the health care system. 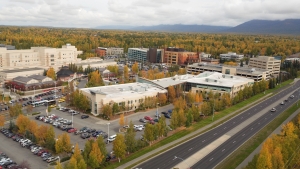 Customer-ownership key to SCF’s past, present, and future

On this milestone anniversary, SCF celebrates the voices of all the customer-owners who have shaped and driven the health care system’s design over its 40 years. From its humble beginnings, when SCF first assumed contracts with the federal government to manage dental, optometry, and health education services in the region, to 1997 when ownership of the primary care system was transferring to Alaska Native people in the region, SCF leaders have always looked to customer-owners to determine the changes that are needed and desired.

SCF has a rich history of conducting focus groups, surveys, one-on-one interviews, and meetings with customer-owners, including Elders and Tribal representatives from all over the region, to obtain feedback. Early on, the priorities identified by customer-owners were drafted into a list of requirements that SCF calls its “Operational Principles.” SCF used the requirements to develop a mission, vision, and key points, and then set out to find best practices that could be tailored to fit what the customers really wanted.

SCF’s Nuka System of Care is a departure from beneficiaries or “patients” serving as mere recipients of tests, diagnoses, and pills. Instead, customer-owners actively share responsibility for the success of the health care system and for their family’s health and wellness. Working together, at all levels, ensures the system is fully aligned with customer-owner values and priorities. Every aspect of the Nuka System of Care, from facility and infrastructure design to health care delivery and improvement, is driven by customer-owners.

With the improvements in the underlying principles of the health care system, came the expectation that customer-owners be involved in decision making, including asking questions and providing input. Providers share responsibility with customer-owners and their families, supporting customer-owners’ health goals and, along the way, providing evidence-based treatments, coaching and encouragement. The Nuka System of Care emphasizes understanding each customer-owner’s unique story, values, and influences to engage and partner in care and support long-term change. With customer-ownership, everyone started to work together toward one vision: A Native Community that enjoys physical, mental, emotional and spiritual wellness.

By putting the voice of the customer-owner at the forefront of what SCF does and how it’s done, the Nuka System of Care will continue to develop and improve for generations to come.

For more information on the history of Southcentral Foundation, visit bit.ly/3Gx3UZG.

Benefits of Telehealth Visits for Customer-Owners
Scroll to top