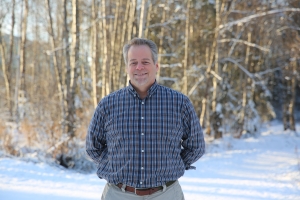 “Fire, fire, fire!” the crew yelled, as the entire battleship shook, and black smoke encompassed their surroundings. On April 19, 1989, a 16-inch gun turret exploded on the USS Iowa. The explosion killed 47 sailors instantly. The investigation concluded the explosion likely took place due to the powder bags being over rammed when loaded.

While the explosion was more than 30 years ago, for Michael Todd it seems like yesterday. Todd was serving in the U.S. Navy on a similar battleship at the time of the explosion. This tragedy brought awareness to the risks he was facing each day and how even if he completed his job safely and efficiently, equipment malfunctions or human error could have devastating consequences.

“In the military, there can be an overwhelming level of stress that you experience by feeling powerless of your surroundings,” the Navy veteran said.

A father of three and stepfather of three more, Todd served on active duty for one tour and completed six years in the Navy Reserves. His primary job was as a boatswain’s mate, considered to be a jack of all trades. His duties included deckhand maintenance and flight operations, and firefighter. During general quarters evolutions, he served in the 16-inch gun turret as both a gun powder handler and range finder.
He served on the USS Missouri, which is now retired and rests in the heart of Pearl Harbor Memorial. The battleship was in commission for World War II, the Korean War, and the Gulf War.

“The working schedule kept us busy, and there wasn’t much time for reflection while we were in the Persian Gulf,” Todd shared as he reflected on the periods of loneliness and depression he encountered. The crew deployed to the Persian Gulf for extended periods, and the only way to communicate with their families was by mail.

The military veteran of 10 years began working at SCF in January 2017. He was completing new hire orientation when he heard about a program called Soldier’s Heart. Todd said Soldier’s Heart not only helped him in his personal life but benefited his professional career, as well.

“Soldier’s Heart is a peer-led program to help veterans, first responders, law enforcement, and their families learn skills that can help them get through their post-traumatic stress in their personal and professional lives,” he said.

“I did not realize how much the trauma impacted me until I completed the Soldier’s Heart program. I had feelings of unease and stress but never understood where it came from. After completing Soldier’s Heart, I was able to identify my triggers and use tools from the training to cope,” shared Todd.